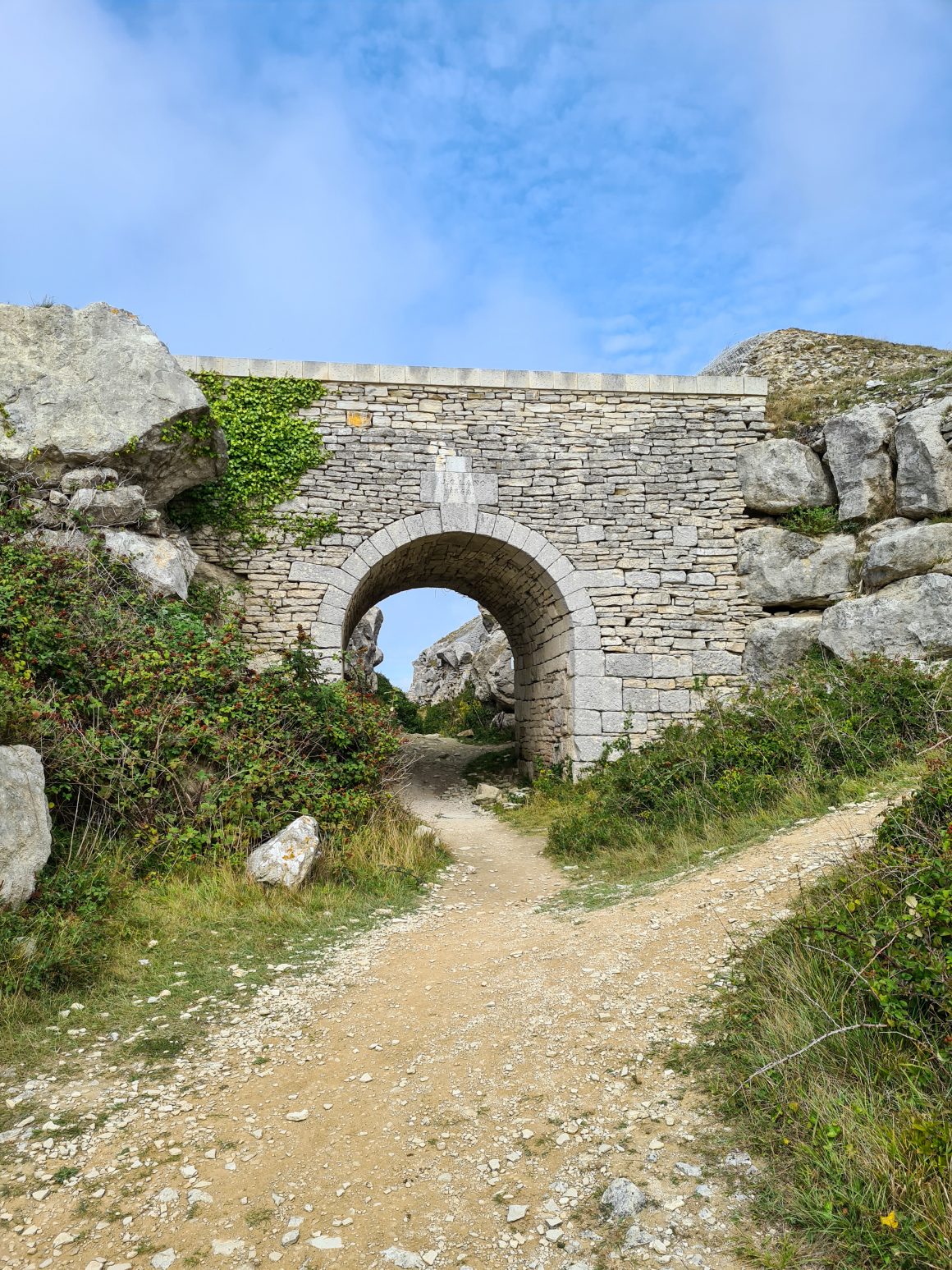 The Isle of Portland is a place that definitely surprised me. Located just off the Dorset coast, joined to Weymouth by a spit of sand, it’s not somewhere visitors to the county would put at the top of their list. We were looking for free and unusual things to do on our visit to Dorset, so I decided to take a gamble and lead us into the unknown.

Our first destination was Tout Quarry on the west of the island. It’s a free sculpture park, and open to four-legged friends, so I thought it might make for a pleasant walk. To reach the quarry, we had to drive through what is essentially an industrial estate, and park in a tiny car park behind a warehouse. I was unsure of what to expect, and Dan was definitely sharing my concerns as we walked towards the entrance, which is just a small path in some bushes.

In almost no time, we emerged on an open space to our left, filled with blocks of stone in fascinating shapes. Although the path we were on continued and bent round to the right, we made a pit stop to marvel at the vast collection of carvings in front of us. Some were quite abstract, but others were clearly recognisable animals and creatures – a bear, a horse’s head, rabbits, this strange kraken style figure.

We continued on the original path, still underestimating what the quarry had to offer, and stumbled across a sculpture of a Viking long ship. It reminded me of the giant long ship we saw on one of our first trips away with Ted to Sutton Hoo in Suffolk. To take a picture with it, we had to climb up on some rocks – I managed it up easily, but getting back down isn’t easy for a pregnant lady, and I needed rescuing quite quickly.

Soon we reached an archway, beautifully carved from limestone blocks, with a path through it. Ever the explorers, we decided to take that route, letting Ted lead the way through the overgrowing grasses and plants either side of what was essentially a giant, rock corridor. I was slightly nervous – there were signs saying ‘Beware Falling Rocks’ and I had visions of an enormous boulder hurtling down towards us.

Luckily, that didn’t happen, and we were greeted with a clearing, and the most incredible view of Weymouth. I’d argue it could well be the best viewpoint in the whole Isle of Portland. We sat on a ledge together, gazing out at the vista before us for almost an hour, ignoring everyone who passed and totally hogging the spot, but it was worth it!

We wished we had brought a picnic, as lunch time was approaching, and we were starting to feel a little peckish. We visited the Isle of Portland during the summer of 2020, so were a little restricted by Covid restrictions (restaurants running at a limited capacity), and the Eat Out To Help Out fiasco (half priced meals under £10 which meant no one cooked a meal for a month). The first place we arrived at turned us away, so we opted for lunch at The Eight Kings. There was no designated parking for the pub, but we managed to snatch a spot on the street. When we entered, it transpired that we were the only people in the pub, aside from an elderly man at the bar. The lunch menu selection was quite small, but the sandwiches we chose did hit the spot. I was glad we were able to support a potentially suffering business that day.

Then from The Eight Kings, we continued down Portland Bill Road to park up outside Portland Bill Lighthouse. Admittedly, this was my least favourite part of the day. The car park was expensive, and had broken pay and display machines, it was rammed with people, and just looked a bit tired. Although we had planned to get out and wander around the area, I made the call to leave it and make our way back towards Weymouth. No regrets!

On our way off the Isle of Portland, we decided to park up at Chesil Beach, just for a look. We never guessed we would spend almost an hour on the pebbles!

There is a steep hill on the beach between the sea and the car park, which is quite tough to climb. The wind and sea was incredibly powerful on the western side of the beach; we didn’t want to get too close to the water in case the waves snatched Ted from us. The eastern side had the protection of the hill, so we could actually hear each other speak. Even though it was cold, and rain was clearly on the way, we sat on the pebbles, let Ted off the lead for a wander, and relaxed.

Who knew the Isle of Portland was such a great place for a free, dog friendly day out? I certainly didn’t.

Turn your bathroom into a home spa experience

The best way to visit Durdle Door and Lulworth Cove