Independent review| The last time I played table tennis was nearly two years ago, in the spa area of a hotel in Croatia. As someone who constantly bumps the kerb in my car, it’s safe to say that my hand eye coordination leaves a lot to be desired, but when I found out that I’d be spending a couple of hours at Bounce ping pong club on Old Street in London, I was totally up for it.

The first thing that hit me as I descended the stairs to the bar was how cold it was! The air con was blasting, even though it was a cool spring afternoon, and I almost put my coat on as we made our way into the main room.

Although most of the tables were taken, Bounce ping pong club was surprisingly quiet for a Saturday afternoon. We were able to nab one of the tall wooden bar tables and set up a base as we surveyed the area and ordered drinks. Dan and one of our friends split a £45 bucket of 10 beers – much more cost effective than buying them one at a time, and of course, I had to order a Pornstar Martini before I hit one of the ping pong tables. Plus, since Dan and I were famished, we placed an order for a pepperoni pizza, which was actually really tasty, even though it had a little kick of chilli.

Two hours playing ping pong was loads of fun: what could be better than having hundreds of neon pink ping pong balls bouncing off you for an afternoon? Despite being with a large group of friends, Dan and I got an opportunity for some one to one time, which started out as a serious rally and descended into us whacking the balls at each other as hard as we could. For a moment, we were able to forget about all our adult responsibilities and have a bit of much needed fun.

It was then that I realised why the air con was blasting. I’d built up such a sweat playing that I had to take my jacket off to carry on without feeling faint. I imagine on a date, an hour might be quite a long time to play, especially if you still need to keep up appearances and pretend you don’t sweat.

Overall, I had a great time at Bounce ping pong club, and would totally go back for a date with Dan in the future. Next time though, instead of booking a standard table, I’d try to get one of their interactive tables – they use a projector to play an array of games which looked like a right laugh.

If you’re looking for somewhere cool to go for drinks and fun in London, definitely consider Bounce.

What to expect from a visit to Hampton Court Palace 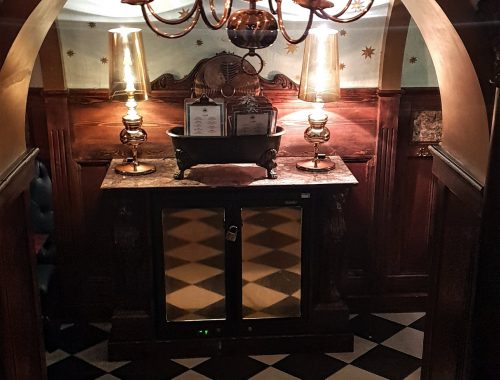 Drinks at The Escapologist Cocktail and Wine Bar, London