What is a necessary stop for any itinerary in Wales is St David’s. It’s the UK’s smallest city, which also seems to have the UK’s tightest roads and the UK’s smallest car park. Incredibly, on one August afternoon, we claimed the last parking space, which meant I was faced with the most nonsensical charging system, ever.

Against my better judgement, and because I only had a £1 and £2 coin, I settled on the offensive £3 charge for four hours.

It was mid-afternoon. We left the car park sleepy, but were rejuvenated at the sight of the ruined abbey behind a wall. Our main destination was the cathedral – although neither of us are religious, we can’t avoid the allure of a church. It was our first stop.

It’s small for a cathedral, but it’s surely magnificent. The path towards it is pretty, with old fashioned street lamps along a stone wall, and a gateway leading to the cathedral grounds. Unlike York Minster, Westminster, and even Canterbury, St David’s Cathedral is surrounded by greenery on all sides. It once formed the graveyard, but now is the perfect location for visitors to relax in the overwhelming beauty of the area.

Inside, the cathedral is cool and airy. Dan and I had to take turns to explore, since we had Ted with us, but I didn’t mind. If anything, it made the experience a little more poignant. Churches always give me a little chill, and I was fascinated to find the famous burials within: Gerald of Wales, and Edmund Tudor – father of Henry VII. Delving a little deeper, I found a courtyard with a sculpture of the Madonna, and a garden, however, I was very aware that Dan was outside waiting for me. I felt I had to rescue him.

As it happens, while I was inside, Ted had made friends with two other cavaliers, a 13 year old and a four month old. I’m sure dogs can sense their own breed – Ted is always more excited to see cavaliers than any other breed of dog. Puppy play time became quite dramatic. Ted’s new friend managed to escape and spent her time bounding around the graveyard, until Dan leapt forwards and caught her.

After Dan’s heroism, we decided to meander up towards St David’s city centre. On the way, I had to sheepishly pull Ted, with leg aloft, away from the gravestone he had chosen as a toilet.

We had a wander through the city centre, which is a little more Saundersfoot than Sheffield, and settled on a drink in The Bishops – a dog friendly establishment with a lovely beer garden. It would have been a relaxing break, were it not for the seagulls, goading Ted by standing on a lamppost while we sipped beers. For the first time ever, we had to apologise, and explain Ted’s furious barking.

Our final stop of the day was to St Non’s Chapel and Well – the apparent birthplace of St David himself, Wales’ patron saint – and dedicated to his mother. To reach it, we had to drive down the tightest road I’d ever seen, perhaps known to man, and pray that no car is coming in the opposite direction. When we arrived, I realised how exhausted I was. No way did I want to go for another long trek, and I made it known.

I huffed as I descended the steps to the well, but is surprised by what we found. The well isn’t a traditional circular structure, more of a pool of water with a box built over it. Bright flowers grow around it, likely hydrated by the well itself. It is a quiet place, one of reflection and prayer, and turning around to see St Non’s shrine, embellished in relics and flowers solidified that atmosphere.

A few yards away, in the centre of the heath, is the ruin of St Non’s Chapel. Although significant in religious and Welsh history, it’s somewhat forgettable in comparison to the views from the coastal path.

It probably was poetic to start and end the day gazing at the majesty of the Welsh coast, but my feet hurt, I was tired, and I was ready to go home to a Coke and a burger.

Why You Should Visit Tintern Abbey

What No One Tells You About Keeping Tropical Fish 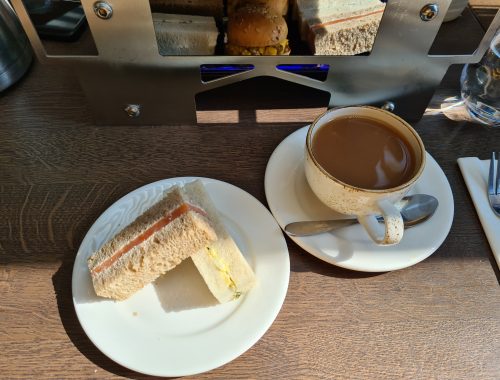 Why not try afternoon tea at Vicinity, London?