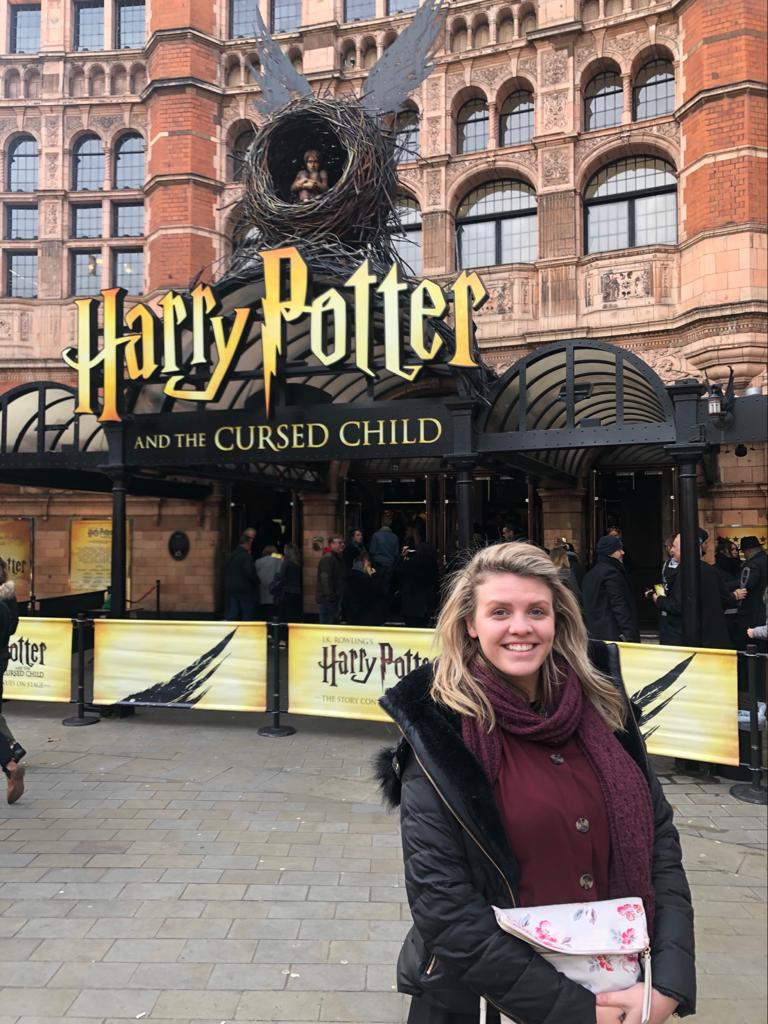 Independent Review| We’d been waiting over three years to get tickets to the production of The Cursed Child, at the Palace Theatre, the latest (chronological) instalment in the adventures of Harry Potter. Both Dan and I had tried on multiple occasions since its premiere to even get in the queue for tickets, and I had just accepted that I would never see the performance.

Then a miracle occurred! Because the show is in two parts, you have to book two separate tickets, either for the same day or consecutive days. Somehow, we’d stumbled across available tickets and managed to book for a Sunday in November. Actually, it was the day after my birthday, so our trip doubled as a birthday present and we reserved at table at Steak and Co in Covent Garden for the break.

The Palace Theatre isn’t as large as I’d imagined it to be; it looks enormous on the outside, but on the inside it’s cramped and uncomfortable. Though, in hindsight, that might be because I was so uncomfortable after the six hour show. On the ground floor, there’s a gift shop, stacked with Harry Potter memorabilia, especially gifts in the four Hogwarts house colours. Our seats were in the Grand Circle, so we ascended the stairs to the fourth floor.

On the way, I thought I’d be a good idea to use the loo, so took a short pit stop. Boy, I was wrong! If it wasn’t initially obvious that it was built in the late 1800s, you’d realise it as soon as you tried to use the toilets! I stood in a line for almost 20 minutes for the privilege to use one of four cubicles – in a theatre that seats 1400 people.

That’s what it’s like to sit in the Grand Circle!

For the first few hours, it’s okay, but after the break and the ability to walk around, the thought of returning to the hobbit furniture is horrid.

The story of The Cursed Child begins straight after the events of the epilogue in the final Harry Potter novel, and covers the adventures of Albus Severus Potter, Scorpius Malfoy, and an illicit time turner. Friendship and acceptance are its key themes. Don’t worry, I’m not going to spoil anything.

Of course, many of us have read the play, but most of the fun is in the spectacle of the performance. Trust me, there is genuine magic in the show!

I was thankful for it too, as I really didn’t enjoy reading the play at all. On stage, some of the stylistic choices make sense, like the short scenes to represent the passing of time at the start of Albus and Scorpius’ school career. Jamie Ballard played a Harry almost identical Daniel Radcliffe’s characterisation, but it was Jonathan Case, playing Scorpius, who was by far the most striking performer of the cast. His comic timing was perfect, and I was even a little choked up at one of his monologues.

I’d argue that it isn’t really a play about the famous Harry Potter, or Albus, but about Scorpius Malfoy’s growth and maturity. That was the biggest surprise.

Related: 7 Reasons You Should Watch a Play at Shakespeare’s Globe

I was completely thankful to Dan for getting the tickets, but was a little sceptical of whether I would enjoy the show or not. For the most part, I did enjoy it: most of the performers were fantastic; the special effects were second to none; and it made for a lovely day out. Downsides? The antagonist aspect of the plot isn’t as as strong as I thought it could be, and there are some scenes which I suspect were added in to drag the story into two blocks of three hour performances.

The woman sat next to us said it was her third time at the play. Would I pay nearly £300 to see The Cursed Child again?

No, once was enough.

Enjoy a walk at Wat Tyler Country Park all year round

Fighting Back the January Blues

[Gifted] This is motherhood.
I can assure you, this is a lot more imposing in real life.
This scheduled post may not have aged well...
Is this Corsica or Dorset?
The best thing about the spring and summer months in the UK are 100% the flowers. I'm a sucker for wildflowers - bluebells in May are my absolute favourites.
AD| The pandemic has been tough on people in relationships (like me), but has also had a huge impact on all the singletons out there. How are you meant to meet your Prince Charming when all the pubs, bars, and clubs are shut?
This website uses cookies to improve your experience. We'll assume you're ok with this, but you can opt-out if you wish. Cookie settingsACCEPT
Privacy & Cookies Policy