After leaving White Scar Cave, we were famished, so decided to take a pit stop in Dent after I eavesdropped on an American man’s conversation at breakfast. He said it was particularly beautiful, and only a slight diversion from our route to Hawes, we thought ‘why not?’

It poured down while we were there, but we stumbled across something that would change our week entirely. A book. Not just any book… Short Walks in the Yorkshire Dales

We arrived in Hawes in the early afternoon. Conveniently, we had booked The Board Inn on Market Place for two nights, only a few feet from a great fish and chip shop, and the lovely waterfall that runs through the town. The staff were fantastic, and the stay here was the highlight of the week.

Since the afternoon had only just begun and the rains had finally cleared, we decided to take a ramble through the neighbouring fields, jumping stiles until we reached The Green Dragon Inn, the entrance point to Hardraw Force.

In a week of seeing record attractions, Hardraw Force is England’s highest single drop waterfall, and was also used in the filming of Robin Hood: Prince of Thieves – that scene where Robin Hood has a wash! It’s mesmerising to watch the huge mass of water plummet to the ground and more so to try and watch a single drop make its journey.

To return to Hawes, we had to cross farmlands. Here we had our first real experience with the power of nature.

We reached a farm populated by cows, and we knew that cattle can be particularly dangerous to approach, especially mother and calf, so we hesitated to scope the situation. At the other end of the farm, I noticed a group of people running and frantically climbing, so we waited until all the cows had moved to another area of the field before crossing.

It was then that I realised, it wasn’t the cows. Ahead of us, three sheep were positioned at the gate. Slowly, all three turned their heads and locked their demonic eyes on us. We froze, hoping they would turn around and carry on their business. They didn’t. The next thing we knew, we were climbing over hay bales to escape three young rams headbutting barbed wire.

We thought that was it, but oh no! A few fields later we realised the stile we needed to cross was being guarded by a pony. It’s only a pony, I figured. They come across humans all the time. We approached gingerly and despite its stamping and snorting, we made it, but as we reached the stile, we spotted more sheep. Again, all seven looked up and stared at me like teens outside a Tesco. We were between a rock and a hard place, and Dan warned me to be careful so I crossed the stile and took a step towards the sheep. They took a step towards me.

We risked the pony.

The next morning we had breakfast at The Board Inn, and booked a table for dinner. The pancakes, covered in berries, with a side of bacon and syrup, was like a dessert for breakfast. I got halfway through and felt the sugar shakes kick in. I knew I was ready for the day ahead!

Up next: A day in Aysgarth exploring a castle.

#10 Year Challenge - Reflection on a Decade

Drinks at The Escapologist Cocktail and Wine Bar, London 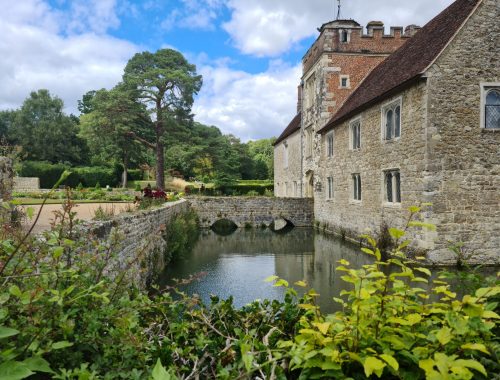